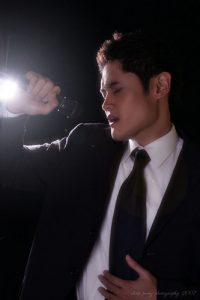 Having been exposed to different cultures and schooled in some of the world’s most distinguished universities, KV carries with him a distinct quality of presence that is both unique and refreshing. Wit, intelligence, and a voice that embodies emotion and soul – KV takes a simple event to an entirely different level of experience.

“It’s all about spark”, KV says. “That very moment when my hand holds the microphone and the very first note plays, a mere gathering transforms into priceless moments that make up a treasure chest of memories for both myself and the celebrants. A job is just a job for many but to me, this is my chance to be a part of something momentous. It is my chance to be an ingredient of a masterpiece”.

This emerging talent has been often described as a more modern version of Josh Groban and has been remarked as exuding the cool stage presence of Michael Buble. “I have deep respect for various artists and Josh/Michael are two of my favorites although I try to stray from copying anyone’s style”.